Q&A with the creators of Netflix’s The Sea Beast

Q&A with the creators of Netflix's The Sea Beast 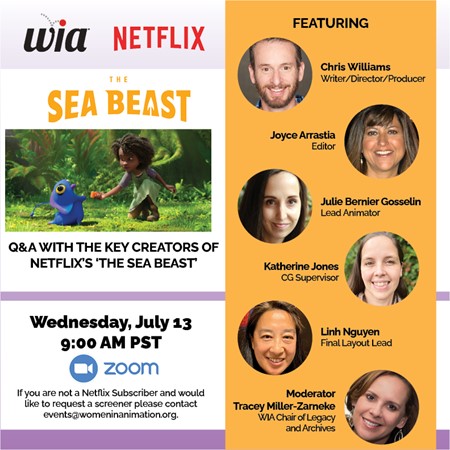 In an era when terrifying beasts roamed the seas, monster hunters were celebrated heroes and none were more beloved than the great Jacob Holland. But when young Maisie Brumble stows away on his fabled ship, he’s saddled with an unexpected ally. Together they embark on an epic journey into uncharted waters and make history. From Academy Award-winning filmmaker Chris Williams (Moana, Big Hero Six, Bolt), The Sea Beast takes us to where the map ends, and the true adventure begins.

Chris Williams is an Academy Award ® -winning director and writer of animated films. Chris has been drawing since he could hold a pencil, and growing up he was obsessed with visual storytelling.  He wrote comic strips, made stop motion films, and loved all things movies. He is a graduate of the University of Waterloo’s Fine Arts program and Sheridan College’s animation program. Upon graduation, he moved to Los Angeles and began his career in animation, which spans across iconic films such as the Academy Award  ® -nominated Bolt, Academy Award  ® -nominated Moana, and Big Hero 6 which won the Academy Award ® in 2015, along with many others. The Sea Beast, William’s debut at Netflix, will release globally on July 8th.

​​Joyce Arrastia is a Film Editor, who has been cutting Feature Animated films for nearly 20 years. Her most recent project is “The Sea Beast” for Netflix. She was born in Brooklyn, but her family hails from Argentina, and she is proud of her SpanishBasque roots. As a child, her love for films and going to movie theaters & drive-ins, led her to pursue a career in filmmaking. It was during film school at UCLA, that Joyce first spliced together two images of film and fell in love with the magic, and trickery of Editing. When not working, she can be found satisfying her wander lust through global travel, deepening her spiritual foundation with yoga & meditation, or just chilling at home with her bulldog, Bertha. She lives in LA and NY.

Katherine Jones is a CG Supervisor at Sony Pictures Imageworks, most recently supervising THE SEA BEAST for Netflix.  She has been at Sony Imageworks since 2015 and her credits include: the Academy Award®-nominated THE MITCHELLS VS. THE MACHINES, VIVO, the Academy Award®-winning SPIDER-MAN: INTO THE SPIDER-VERSE, SPIDER-MAN: HOMECOMING, SMALLFOOT, STORKS, and THE EMOJI MOVIE.

Julie Bernier Gosselin is a Lead Animator at Sony Pictures Imageworks, most recently completing work on the Netflix animated feature THE SEA BEAST. She was the character lead animator on one of the films’ main characters, Maisie. Over the years, Julie has worked at Sony Imageworks as both an animator then lead animator on various films, including: the Academy Award®-winning SPIDER-MAN: INTO THE SPIDER-VERSE, OVER THE MOON, THE EMOJI MOVIE, SMURFS: THE LOST VILLAGE, STORKS, THE ANGRY BIRDS MOVIE, CLOUDY WITH A CHANCE OF MEATBALLS 2, and THE SMURFS 2.

Linh Nguyen most recently served as Final Layout Lead at Sony Pictures Imageworks on THE SEA BEAST for Netflix. Since 2008, Linh has worked as a Camera Layout Artist and Lead at Sony Imageworks. Her credits include: the Academy Award®-winning SPIDER-MAN: INTO THE SPIDER-VERSE, OVER THE MOON, SPIDER-MAN: HOMECOMING, HOTEL TRANSYLVANIA 2, SMURFS: THE LOST VILLAGE, ALICE THROUGH THE LOOKING GLASS, and CLOUDY WITH A CHANCE OF MEATBALLS 2.